Having been asked to recommend a bag as a special present for one of my friends to buy his girlfriend, I found myself spending yesterday lunch time browsing websites like Louis Vuitton, Gucci, Michael Kors and Ted Baker, but came across the Kate Spade New York site.

I've seen quite a lot of Kate Spade products when browsing Pinterest, which have found their way into more than one of my boards, so I was intrigued to do a bit of research on the range of bags and the prices. I knew this was a dangerous move...

The Charlotte Street Reena in beige caught my eye, among others of course, and is currently on sale on the UK site. 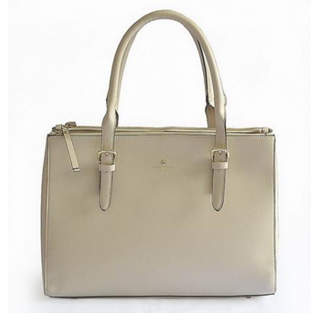 It boasts 2 side zip compartments, an interior zip, double side pockets, a magnetic 'snap closure', and the delicate gold spade logo on the front. With the colour being quite neutral and not a bright white or anything startling, I think this could be paired with a lot of outfits from blacks or navies to pastels like a green or pink ready for the sun to finally make an appearance.

As I've always been wary of buying bags in a shade this pale due to my own clumsiness and inability to control a biro, I think this might be a good place to start... I told you it wasn't safe doing 'research' for someone else! I've made a couple of attempts at buying the bag tonight but seem to be having unexpected difficulty with the UK site so I'll have to patiently wait on the edge of my seat for now.

Oh and if you're interested, I recommended a Michael Kors bag in the end as I'm still slightly in love with my Jet Set Tote I bought a few weeks back!

11th April 2014 UPDATE
I wrote the above blog on the 8th and was able to purchase the bag in question on the 9th, however I've since been given reason to suspect that katespadebritain.co.uk is not a genuine site even though it's doing a pretty good job of coming across as one. I have contacted the trademarking department of Kate Spade New York to confirm my suspicions asking for an urgent response and I will update this however necessary. In the meantime, please do not use this website.

18th April 2014 UPDATE
I've now received confirmation from the Kate Spade New York site that katespadebritain.co.uk is NOT GENUINE. Although some people are more than happy to buy fake bags, I'm not one of them, and especially not from a site posing as the real thing. I have contacted the site to ask for my order to be cancelled and for a refund but I'm awaiting a response still. In the meantime my bank are sending me forms to claim back the money as I paid on my credit card (which I would always advise doing if you're spending larger amounts online). Please share this information and do not use the site. Kate Spade NY have advised that the following sites are genuine stockists:
www.katespade.com, www.surprise.katespade.com, www.saturday.com, www.katespade.jp, www.katespade.cn, and www.katespade.kr.

October 2014 UPDATE
The above website has been taken down and yet I've recently received an email from whoever I bought the bags from asking for me to pay them again and send the bags back, which were never received. I received my full payment back from my credit card company so it's definitely worth using a credit card for the security.
Anyway, I think this sneaky lot are back in the form of www.kscart.co.uk... there are plenty of signs; images you'd expect to be links that don't work, spelling mistakes, missing words, the number of items available etc etc. So avoid it like the plague ladies, and spread the word!

Please leave me a comment if you've found that my misfortune has helped you! And don't forget to spread the word on Twitter etc to stop others using this site.

Posted by Bags of Style

Look up any word within the dictionary offline, anytime, anywhere with the Oxford Advanced Learner’s Dictionary app. Our editors will evaluation what you’ve submitted and determine whether or not to revise the article. While this world well being disaster continues to evolve, it may be} useful to look to past pandemics to better understand means to|tips on how to} respond today. The Upper House and Tatler have partnered to launch House Stories, a 2020 panel collection exploring fashionable 슬롯커뮤니티 culture in Hong Kong at casual gatherings. Our well-known Sunday Sessions occasion collection has been reignited in partnership with Tatler Hong Kong. Enter your e mail address to obtain our weekly newsletter and other special bulletins.